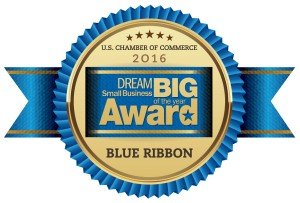 We’re excited to announce that Crimson Cup has been selected by the U.S. Chamber of Commerce as a 2016 Dream Big Blue Ribbon Award winner. We were the only company from Columbus and one of three from Ohio to win the award, which recognized 100 U.S. companies for their “success and contributions to America’s economic growth and vitality.”

“Our ongoing success is made possible by everyone in the Crimson Cup Community – from our central Ohio cuppers to the small farmers who grow our coffee and the community of thriving independent coffee shops and specialty grocers across 29 states and internationally who distribute our coffee to consumers.”

The Blue Ribbon winners were selected from a record number of applicants from across the country. Businesses were judged in four key categories: strategic planning, employee development, customer service and community involvement.

Crimson Cup is also vying for the Community Excellence Award, which recognizes one Blue Ribbon business that has found notable success in the eyes of its community. The winner will be decided through online public voting to take place February 18 through March 4, 2016. You can cast a vote on Crimson Cup’s page on the U.S. Chamber of Commerce website.

This is the third recent award for Crimson Cup. We were named 2016 Macro Roaster of the Year by Roast Magazine and 2016 Ohio Small Business of the Year by the Ohio Made Awards.

Many thanks to everyone in the Crimson Cup community who made these awards possible!