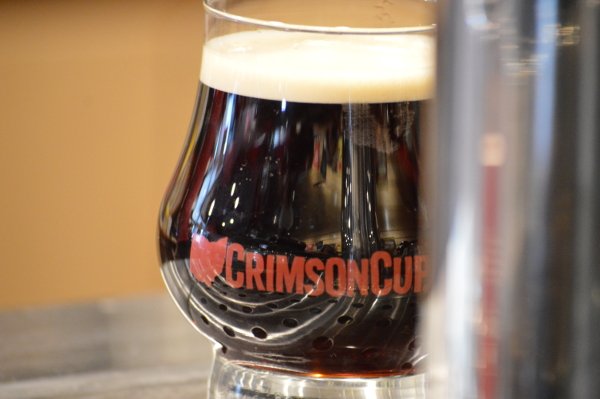 One of the hottest trends in coffee today is ice cold, infused with nitrogen gas under pressure, and dispensed from a tap. And, thanks to our joint effort with Heidelberg Distributing Company, Nitro cold-brewed coffee is joining the taps of some of the city’s hottest bars and restaurants.

“Demand has skyrocketed since we introduced Nitro cold brew to Columbus in 2014,” said Crimson Cup Founder and President Greg Ubert. “This effervescent iced coffee has the texture and mouth feel of a fine milk stout – making it a perfect non-alcoholic addition to bar taps.”

The partnership with Heidelberg Distributing Company was a natural fit. “Nitro coffee is up and coming. It’s a growing area that ties in with our craft beer sales,” said Dan Diem, Heidelberg’s general sales manager for beer. “Crimson Cup is a leader in central Ohio, and we felt a partnership with Nitro would be mutually beneficial for both companies.

“We are looking at exponential growth with this product,” Dan Diem added. ”Currently we are selling to a dozen or so accounts, and we anticipate that number increasing dramatically.”

Because Crimson Cup’s Nitro cold brew starts with a concentrated, hand-brewed base of fine craft coffee, it packs a harder caffeine punch than a standard cup of Joe or espresso-based beverage, Greg noted. “The nitrogen bubbles create a visually intriguing drink with a rich, creamy texture and natural sweetness without the need to add milk and sugar,” he said. “It makes the perfect morning pick-me-up or cap to a night on the town.”