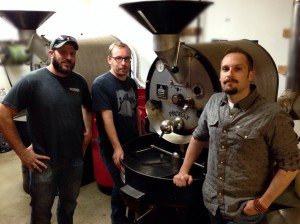 Developed through months of testing by our coffee team of Dave Eldridge, Brandon Bir and Chris Shegitz, this unique cold brew has the hoppy taste and creamy texture of a fine craft stout – but without the alcohol.

The team began creation of the cold brew with Jorge’s Pick coffee beans, a Friend2Farmer selection from Guatemala. They added dried whole cone hops from Oregon during the brewing process. After days of brewing, we use nitrogen to push out this tasty brew, giving the beverage the mouth-feel of a well-balanced stout.

This cold brew has a taste profile unlike any other. Upon your first sip, you will notice the thick frothy head and heavy cocoa nose. The hops lend a lot of floral and citrus notes, with undertones of fresh-cut herbs.

Columbus media was quick to notice that the Dry Hopped Nitro launch occurred the same week that Starbucks announced testing of its beer-flavored latte syrup.

Thanks to everyone in CBUS for the warm welcome! Make sure to stop by Crimson Cup Coffee House, 4141 North High Street in Clintonville to try Dry Hopped Nitro. It’s available in October while supplies last.