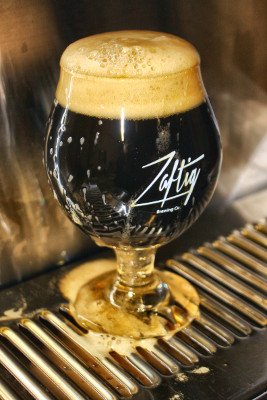 After the success of our Dry Hopped Nitro cold brew coffee, we started looking at other ways to incorporate ideas from the craft brew world. We met Zaftig at the launch party of our Hopped Nitro, and from there we began discussing ways of incorporating coffee into craft beers.

To produce this new brew, Zaftig mashes dark roasted and chocolate barleys to create wort, or unfermented beer. Bittersweet chocolate and our Ethiopian Sidamo Kellenso (a single-origin offering that earned a 92-point Coffee Review) are added after boiling the wort but before fermentation. The end result is a big, beautifully complex breakfast stout

BamBaLam won rave reviews at The Columbus Winter Beer Fest, a Tap Takeover at The Ohio Taproom, The Grandview Craft Beer Associations Hullabaloo and an event in Dayton called the BrewHaha.

Zaftig Co-owner Jim Gokenbach says they can’t make enough to keep up with the crazy demand for this beer right now.

You can find BamBaLam for a limited time at the Ohio TapRoom and the Tap Room at Zaftig. Enjoy!